EVENT CANCELLED. Please contact your ticket point of purchase to claim a refund on your tickets.

Eight-time Grammy Award-winning reggae star Stephen Marley comes to Gerald R Ford Amphitheater on Saturday 4th September 2021 on his Babylon By Bus Tour! Named after his father Bob Marley and the Wailers' 1978 album, the tour sees Stephen perform tracks from his four-decade career, as well as from his father's incredible back-catalog! Not only will he be performing a mighty headliner set, but he'll be joined in support by Bermudan reggae artist Collie Buddz in support! 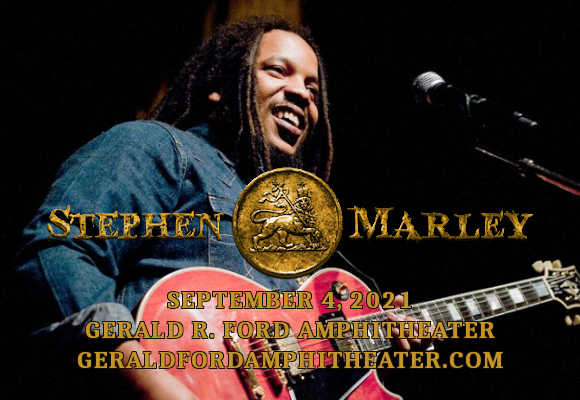 Son of the legendary reggae artist Bob Marley, Jamaican-American singer, songwriter, musician, and producer Stephen Marley is an eight-time Grammy Award-winner. He began his career working with two of his brothers, winning  three Grammy awards as a member of Ziggy Marley and the Melody Makers and the two other Grammy awards he earned for producing younger brother Damian's albums Halfway Tree and Welcome to Jamrock. He released his debut solo album, Mind Control, in 2007 and went on to win the Grammy Award for Best Reggae album with his first three solo albums: Mind Control (2007), Mind Control Acoustic (2008), and Revelation Part I: The Root of Life (2011). His fourth and most recent album is 20216’s Revelation Pt. 2 – The Fruit of Life.